The Journal of Hugh Campbell, Part I: The Adventure Begins

Welcome to the first installment of Hugh Campbell’s Journal!  If you need some background, here is the intro/bio of Hugh, and click here for the memorandum he wrote for the journal.  Enjoy the story!

The first page of Hugh's journal. Notice he took the time to draw faint lines to ensure even spacing on the page. We do not have the original; this is a copy that was presented as evidence in Hazlett Campbell's probate case.

Journal of a Voyage from Ireland to the U. States

Left a beloved home at three in the morning and joined the Ship Perseverance of Capt. Elkins, at Derry about nine.  Being unfortunately connected with Robt. Phillips and family, I was involved in one continued scene of trouble and confusion too tedious and painful to relate until this.

After the customary examination by the mayor, we dropt down to Culmore this evening.  The Capt. returned to Derry to procure the Custom House certificates, etc. and left orders with the pilot to carry the ship no farther than Moville, until he would join her.  The passengers kept constantly on deck on account of the warm weather, and beautiful scenery on each side of the River Foyle, and I soon got acquainted with them.  The greater number of our steerage passengers (in order to drive away the sorrow which a separation from their native land produced) entered into the greatest extravagance of dancing, drinking, singing, etc.  But some of the more aged, gave themselves up to the deepest melancholy.  Our cabin passengers, besides Mrs. Phillips and myself were Mr. Ewing, and Mr. Orr.

Mr. Ewing had a great part of his family in America and was now going to live with one of his sons at his own request; he was old, religious, and deaf, and of course was almost a blank in our society.  Mr. Orr on the other had, was a young, giddy, proud, good-natured fellow, who served his apprenticeship in the Grocer Business, and goes out as much an adventurer as myself.  It cannot be expected that such a motley set of companions would contribute much to restore the happiness I was deprived of at parting my friends, but I tried reading and every rational amusement to reconcile myself to my situation.  Hope still pointed out some way of making amends for the privations of a sea voyage, in a foreign land if Providence allowed me health.

We anchored this morning at Moville and Capt. Elkins came on board in the evening.  After giving orders for fastening the movables and preparing to sail next morning at 10, he called me down to the cabin and requested me to go to Malin Tower for R. Phillips who had concealed himself from his creditors there, and agreed to give the Capt. five Guineas* for sending in his boat for him when the vessel would leave the river.  Mrs. Phillips observed that he (Mr. P.) might with safety come on board at Greencastle and that if any other person went he might mistake them for a Bailiff and not discover himself.  The Capt. assured me that the distance was trifling and that he would not sail without me at all events. 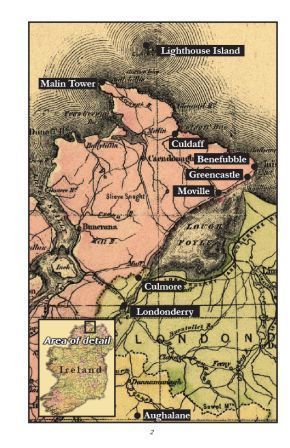 The geography of Hugh's journey

I new that a rough gale might render it unsafe for the vessel to wait near such a dangerous coast for R. Phillips to come aboard, and therefore determined to go for him.  I was set ashore accordingly late in the evening by the Capt.’s  boat near Bennefabble.  On enquiring I found the distance to be upwards of twenty miles through the wildest part of Innishtown but I expected to be able to go there and return before the time the Capt. appointed to sail next morning by walking all night.  I tried to hire a guide to accompany me but the small quantity of cash I brought with me, as pocket money, would not allow me.  It was now after sunset and I was obliged to set out alone.  Made inquiries when I came to any solitary house on the way and wandered on when I could find none.

Up next:  Hugh has a long night, day, and subsequent night that features drunk constables, possible jail time and a race to catch the Perseverance.  Be sure to check in next Friday for the next installment of this exciting story!

One thought on “The Journal of Hugh Campbell, Part I: The Adventure Begins”