This week, Hugh learns a little more about the generous Captain Moses Gale….

Capt. Gale was very fond of political controversy and would take great pleasure in contending in a fine evening with me on this subject. I constantly supported the British constitution to him and most of my fellow passengers, who without knowing anything about it, pretend to be great admirers of the American form of government. In the course of my conversation with him I got acquainted with his history. 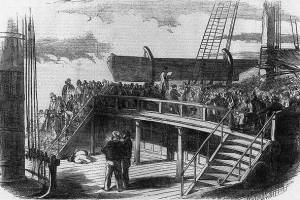 Roll call on deck of an emigrant ship.

His father was an inhabitant of Georgia and owned a handsome plantation in that state. He died at an early period of the Capt.’s life and left him and two or three other helpless children to the care of a Guardian. When they arrived at the age to get possession of their father’s estate they were told it had been expended on their education and were consequently thrown on the world. Seeing nothing better offer, he got one of the most menial offices before the mast in a vessel bound from Augusta to the West Indies and by degrees rose through every station until about 6 years ago, he was made Capt. by his present employer (Mr. Sullivan of New York) as a reward for good conduct and long service. He is about forty and has been married some time to a termagant* lady by whom he has two or three children.

To give a specimen by his good nature and philanthropy, I need only relate what he did for myself in taking me on board friendless and destitute. But his good offices did not end here. He gave up without any renumeration his own state room to Mr. Gray and family from Blanketneuh and gave a free cabin passage to James Kerr of N.T. Stewart. He afterwards took in a Miss Jane Campbell from Derry as an extra passenger. This lady came off under very delicate circumstances and was put under the Capt.’s care. In order to accommodate her with a birth in the cabin he gave his own cot to J. Kerr that she might use his cabin berth, etc. Throughout the whole voyage he slept in a hammock and suffered many inconveniences for no benefit. One day while sitting with him on the Bowsprit** he perceived my melancholy rather deeper than usual and entered into conversation on the subject. “Don’t be discouraged my dear Campbell,” said he “for should that d—nd rascal Phillips be gone from New York with all you have, I will furnish you with money to carry you to any port in the U. States. Things will turn out better than you expect but I am d—nd if they can turn out worse. You can pay me some time if you live and if not I’ll forgive you.”

These unparalleled offers of assistance which called forth my warmest thanks and gratitude were afterwards renewed in New York. But thank God I never required any assistance not withstanding every unfortunate occurrence that happened me.

* Violent, shrewlike.
** Pole extending forward off the front of the ship.

Next week: Captain Gale makes nice with the passengers, and the crew goes sport fishing.