Save our [Gl]Ass, continued: A daunting task

Remember back in August when we were burglarized? (If not, you can get the scoop here.) The burglar didn’t get much in the way of money, but the dirty rotten scoundrel did cause over $2,000 of damage by breaking an etched-glass window in our front door. Thanks to an outpouring of support from membership, our followers on Twitter and friends on Facebook, we raised enough money to have a new window made to match its twin. In more good news, Commerce Bank pitched in some extra money to have the museum’s security system upgraded to prevent this from happening again.

Despite a lousy situation, friends from near and far (Alaska!?), turned it around. Thanks to everyone who donated, sent us encouraging notes, and spread the word of our plight on the internet. You’re the best.

Since August, we’ve changed a few things around here, and, after an exhaustive search, we’ve found someone who has the skills and confidence to reproduce the intricate 130-year-old etched glass panel that was broken. Local artist Lea Koesterer began working on the project last week, and we’ve posted a few pictures to show the progress thus far: 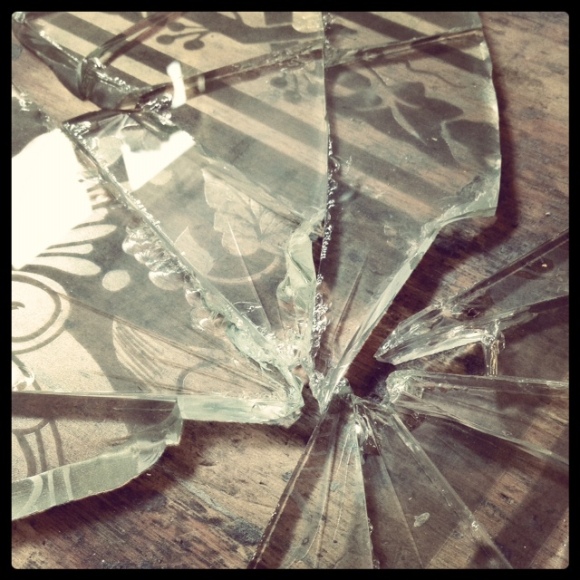 On her work table, Lea attempted to reassemble the glass from the broken pane. Here you can see the point of impact.

Lea knows her glass. Her first task was to find the right color. Every pane of glass has a slight hue, and for this project she needed glass with a hint of green to match the original. (You can see a hint of green in the picture above.) This week she found a pane of glass that was the right color. Before she starts work on the 18″ x 60″ piece that will go in the door, she is going to make a 6″ x 6″ test square.

For the test, Lea had to make a template of the pane of glass that was spared in the burglary: 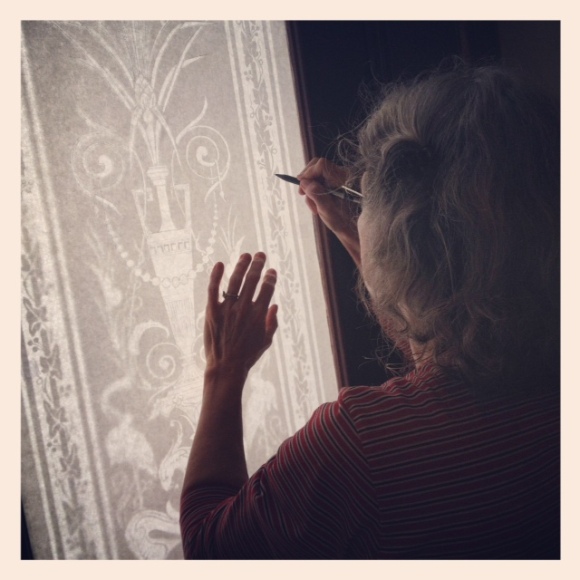 Nothing fancy here. Just a piece of paper, double-sided tape, a mechanical pencil and about five hours of patient tracing. Not surprisingly, poor Lea developed some cramps in her hand as the morning (and afternoon) progressed.

A detail of some of Lea’s tracing.

Lea’s first trip after Campbell House was to the printer. She has to cut the template to create a series of masks for the sandblasting process, and during sandblasting, the template is destroyed. Even to make our little 6″ x 6″ sample, the template will be rendered unusable for anything else. To save another five-hour trip of tracing and hand cramps, a copy (or two) is in order.

Next up: The Sample.

One thought on “Save our [Gl]Ass, continued: A daunting task”