There’s More to the Story: Halloween at CHM

The Campbell monument at Bellefontaine Cemetery here in STL. All 15 members of the immediate Campbell family are buried here (legend has it that two of their dogs are buried with them too).

October is an interesting time of year for us here at CHM.

On one hand, it’s a blast. We get to put up black bunting around the House, carve pumpkins, we’ve been on TV and in print a few times, and we even get to dress up for our Halloween Night twilight tours. On the other hand, a certain seriousness accompanies the season, especially when it comes to talking about some of the darker chapters of the Campbell family’s time in St. Louis. Though the Campbells certainly lived pretty well and had some beautiful things, this time of year brings into sharp focus the fact that having wealth didn’t necessarily make you immune to  tragedy. Ten of Robert and Virginia’s 13 children died before their eighth birthdays, eight boys and two girls. To put this in perspective,the mortality rate for white children in St. Louis in the 1850s was around 21%. The Campbells were pushing 76%.

Of the three sons to survive into adulthood, one died tragically at the age of 30 (James) and the other two lived increasingly reclusive and peculiar lives (Hugh and Hazlett). Hazlett suffered from debilitating mental illness as he grew older and by the time both sons died in the 1930s, neither had married or had children of their own – the Campbell family line ended with no heirs, despite Robert and Virginia’s best efforts.

These are all sad stories, no doubt. But they’re stories that need telling. There was more to the Campbells’ lives than fancy parties and beautiful furnishings (though there certainly were and still are a bunch of those things in this house). Join us the rest of this month here on the blog and then in person on Halloween night as we unpack the darker chapters of death, disease and despair that were a big part of 19th century life at the Campbell House. 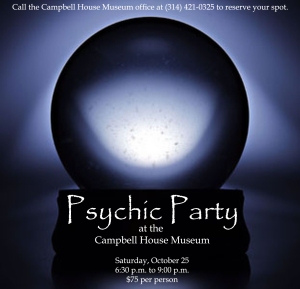 Psychic Party at the Campbell House! Click to enlarge.

Campbell House Psychic Party
Hosted by Mr. Tim Rohan, Vice President of the CHM Board of Directors
Yep, this is EXACTLY as cool as it sounds. Join us for a gourmet selection of wine, beer, an open bar and gourmet hors-doeurves. One of three psychics will provide you with your own private reading. Click here for more information on purchasing tickets.