We tend to focus on history within the boundaries of St. Louis City here on the blog, but St. Louis County residents rejoice! This one’s for you. Last year the Campbell House started a collaborative lecture series with the Historic Hanley House in Clayton, Missouri and we’re continuing the series next Wednesday. 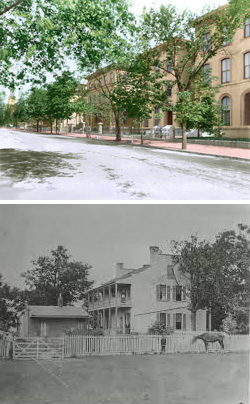 What makes a CHM/HH collaboration so neat is that, even though both houses are located in the midst of bustling urban centers today, back in the mid-19th century St. Louis City and County could not have been more different. The Campbells’ 1851 townhouse sat in the Lucas Place neighborhood at the very western edge of mid-19th century St. Louis City (today, it’s smack dab in the middle of town). The Hanley’s country farmhouse was considerably farther out, a full day’s journey from the city center (if that’s not living in the boonies, we don’t know what is). But despite this major difference, there are actually some interesting parallels between the Campbell and Hanley families and their homes. Here are just a few:

Pretty interesting, right? Well now that we’ve got you hooked, here’s our shameless plug. Join us a week from today, Wednesday January 28 at 7:00 p.m. at the Church of St. Michael & St. George in Clayton for a more in-depth discussion of the parallels between the city slicker Campbells and country folk Hanleys. Campbell House Executive Director Andy Hahn will be joining Hanley House Curator to discuss medical practices in urban vs. rural 19th century St. Louis (and perhaps offering clues as to why the Hanley children survived and so many of the Campbell kids did not). For more information, see below or call the Clayton Century Foundation at (314) 290-8553. We hope to see you there!