The View from Hazlett’s Room

April showers bring May flowers and May flowers bring a beautiful garden along with… a lot of gunk on our roof and in our gutters. Once or twice a year we get up on top of the roofs of the Campbell House’s various built-out bays to clear out debris and do some spring cleaning. This was much easier when the Campbells were living here because their servants could have opened the windows and climbed right out onto the roof. However, as part of the Museum’s restoration in the early 2000s, all of the windows in the house were sealed tightly shut – making a relatively straightforward job a little more interesting (think really tall ladders, lots of climbing and steep roof slopes). 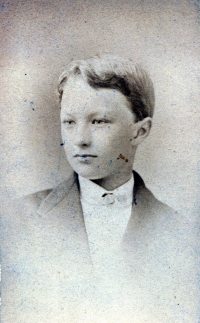 Hazlett Kyle Campbell lived in his family’s downtown St. Louis home for his entire life, from 1858 to 1938.

Today we climbed up to the balcony off of the master bedroom used by Robert and Virginia Campbell and, later, their son Hazlett. During Robert and Virginia’s lifetimes, full length windows opened directly onto the copper surface of the open air balcony, which was surrounded by a detailed wrought iron railing. Some time after the deaths of Robert and Virginia, their sons  enclosed the balcony with an elaborate copper roof and trellised wooden walls. While we can’t be entirely sure of why or even when (our guess is circa 1910) this was put onto the house, our best guess was that it was to provide some privacy to Hazlett Campbell, who became increasingly reclusive and mentally unstable as he grew older. Accounts from servants working at the house recall that Hazlett spent much of his time in the master bedroom, rarely venturing outdoors. By enclosing the balcony, Hazlett would have been afforded some privacy in an era when the houses of the neighborhood were being torn down and replaced by large hotels and commercial buildings. As part of Campbell House Museum’s extensive restoration in the early 2000s, this enclosure was removed to return the east side of the house to its 1880s appearance. Check out the gallery below to see how the use of the balcony has evolved over the past 160+ years. 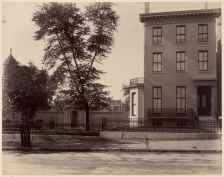 Campbell House ca. 1885. The master bedroom balcony on the east side of the house has yet to be enclosed. 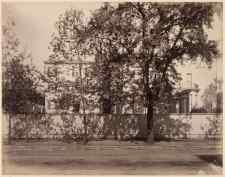 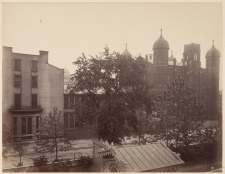 View from the master bedroom balcony at the Campbell House ca. 1885. The building at right is STL’s first public high school. 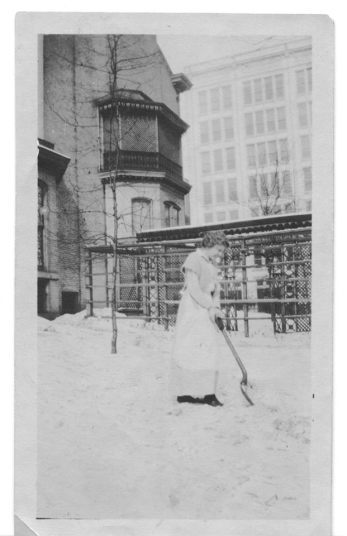 Campbell House servant shoveling snow in the garden ca. 1920. By this point the Campbell sons had added the awning seen at top left to the master bedroom balcony. 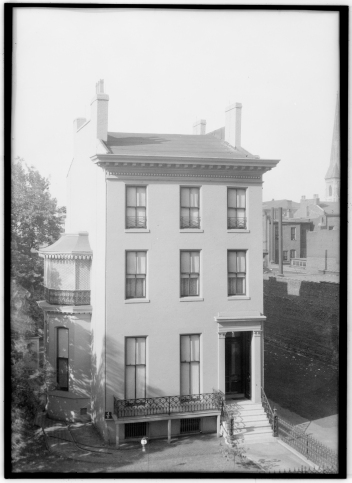 The balcony stayed enclosed for nearly 60 years after the Campbell House opened as a museum. This image dates to the early 1960s.

Cooper roof of the early 20th century awning being lifted from master bedroom balcony in 2000.

Copper roof of the early 20th century awning being lowered to the ground in 2000. 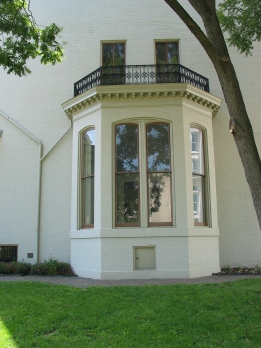 The balcony as it appears today, sans enclosure.

The master bedroom balcony from the bedroom at the Campbell House Museum.

View from the master bedroom balcony this morning – our crew of volunteer gardeners were hard at work!

View from the master bedroom balcony this morning – the view has changed a bit since 1885, eh?

The Campbells would have accessed the balcony through the full length windows in the master bedroom. These and all other windows in the house were sealed shut during the Museum’s restoration in the early 2000s. Today access requires a really tall ladder and some good steady balance.

Shadow of the 1851 wrought iron railing on the copper surface of the balcony.

Detail of 1851 wrought iron railing on the master bedroom balcony.

One thought on “The View from Hazlett’s Room”