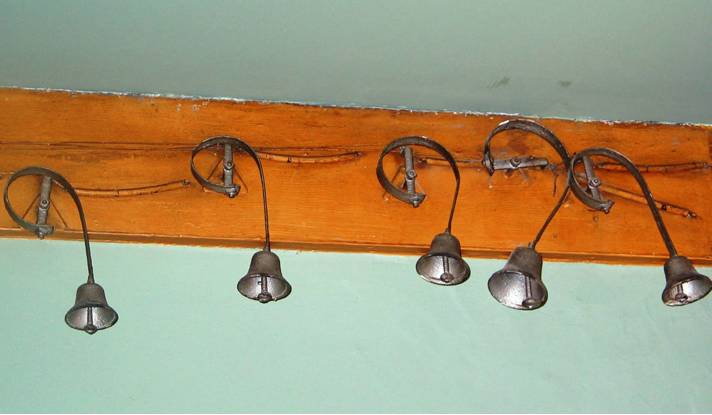 If you’ve visited the Campbell House before, or have watched any of Downton Abbey, you know that one of the most important features of a large house with servants are the call bells.

At Campbell House, the original bells still line the top of the kitchen wall, waiting to ring. Eleven of the house’s rooms had a pull on the wall, and each bell made a different noise, allowing servants to go directly to the room required. If you’ve taken a tour, you know all of this. But what you don’t know is what is in the basement.

Three of the call bells stand apart. Also pictured are the pulleys that guide the cords to each individual bell. 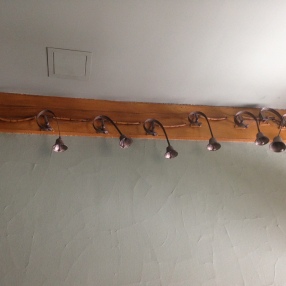 The eastern grouping of call bells.

For the Campbell bell system to work, it needed a long series of cords and pulleys. For instance, a bell pull in parlor would require around 80 to 90 feet of cord to reach the kitchen! And this cord would have to be protected in some way to prevent it from snagging on loose nails or becoming tangled with other cords and wires. 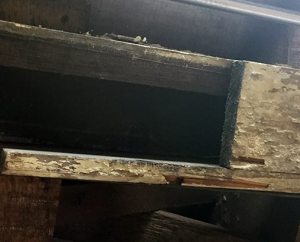 The covered box on the basement ceiling, showing part of the cover cut away.

Using the covered box created a problem, however. To travel from the wall to the box cords now had to pivot 90 degrees three times: from the parlor wall to the basement ceiling, from that spot to the covered box, and from the covered box up to kitchen wall. To facilitate this process, the workmen installed metal pivots. Two of these pivots are still nailed to the basement ceiling near the front of the house. One of them has two separate pivots, perhaps with one for the front door and the other for the front of the parlor. The Campbells undoubtedly made use of several more of these pivots.

This system was probably used thousands of times, whether to call for tea in the parlor, to give instructions for dinner, or to inform of the arrival of a guest. Although the cords themselves are long since gone, the remnants of the system are still there, waiting to call the servants into action once more.

One thought on “Calling all servants…”