The booklet is organized topically, detailing Robert’s rise to prominence, Virginia and Robert’s courtship (see below) and the growth of their family, and the family’s trip to Europe. Also included is a list of the family’s famous friends and guests, a discussion of the servants (both free and enslaved) who were integral to maintaining the Campbell’s lavish lifestyle, and a timeline of the house and family. Every page is lavishly illustrated by photographs and contemporary imagery.

The new booklet is the perfect counterpart to our previously published The Campbell House Museum: A Pictorial Souvenir, which tells the story of the house itself. Be sure to get your copy of The Campbell Family of St. Louis, either in our online store or in person at our gift shop, which is now stocked with new items for the new year!

Picture Yourself in St. Louis History—#PictureYourselfSTL 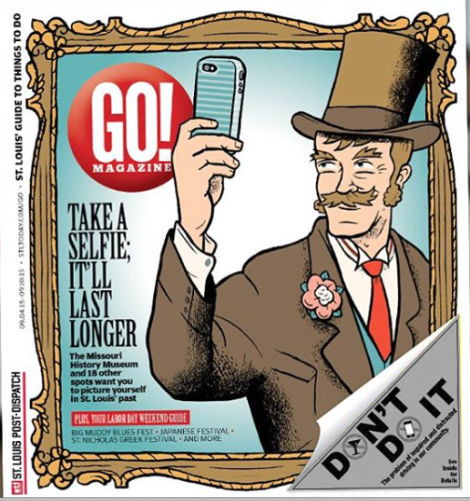 The Campbells didn’t have smart phones, and of course never took selfies. But we bet Robert and Virginia would pull out a selfie stick now, especially since they could win some great prizes by doing so in their own house! This Labor Day Weekend kicks off a special collaboration between the Campbell House Museum and eighteen other cultural institutions, and all you have to do to take part is visit us and photograph yourself.

The new Missouri History Museum exhibit, “A Walk in 1875 St. Louis,” links area historic sites that share a mission of preserving and telling the story of St. Louis.

Each participating location has two picture frames for hand-held use by visitors. Five locations will receive a larger “hub” picture frame and two hand-held versions – the Missouri History Museum, the Forest Park Visitor Center, The Old Courthouse, the Susan Blow Kindergarten and the Missouri Botanical Garden.

Visitors will be invited to take their pictures in and around the frames showing a distinctive background inside the attractions, and distribute their images via social media. An Instagram hashtag, and a web page on the Missouri History Museum site will be available where visitors can post their “historic” pictures with #PictureYourselfSTL or @missourihistorymuseum. Visitors can also email their shots to
PictureYourself@mohistory.org.

That’s it! There are monthly prize drawings, with rewards including hotel stays, attraction tickets, and more. One grand prize winner at the close of the contest wins a tintype portrait session!

The contest is open until February 14, 2016. You can visit each of the nineteen sites and take selfies at each to increase your chances, or to just enjoy a journey through 1875 St. Louis with “Louis” as your guide.

Here are the participating locations:

So open up your phone’s selfie mode, and take part in all the fun and experience St. Louis in 1875!

Read more about the program in the Saint Louis Post-Dispatch.

The “Picture Yourself in St. Louis History” project has been developed and is financially supported by the Museum Innovators Group organized by the Missouri History Museum (MHM).

A story central to the history of the Campbell House and the City of St. Louis, especially as we recognize the historical contributions of African Americans during Black History Month, is that of slavery. Enslaved people served a variety of purposes in St. Louis homes, ranging from caring for babies to cooking and cleaning to working in fields on the city’s outskirts. Research over the past several years has revealed that Robert Campbell owned at least five slaves over a period of 16 years in the 1840s and 50s. The story of slavery at the Campbell House is a tricky one—there are a lot of unanswered questions, unclear records, and gaps in documentation. Here’s what we know:

“Robert Campbell, who is personally known to the court, comes into open court and acknowledges the execution by him of Deed of Emancipation to his negro woman Eliza, aged about twenty five years, of copper or mulatto complexion, together with her two children, to wit: Aleck, a boy aged about two years and a half, and an infant son born in October last, name not known, both of which children of the same complexion with the said Eliza.” See image below.

Why, you might ask, did Robert emancipate Eliza a full seven years before Missouri would abolish slavery in 1864? That’s an excellent question and, to be honest, we don’t have an answer. We do have some ideas though.

“At one time they held a few slaves but Virginia Campbell not liking the system, nor the care of the young Negroes, they were set free. Their servants at the present time are Swiss, German and Irish.”

Freedom Bond signed by Robert Campbell in the amount of $500 to vouch for Eliza’s character after her emancipation. Should Eliza have been arrested or in a legal pinch as a freed African American in slave-holding Missouri, Robert would have been called upon to pay up. (Click to view larger.)

While we would like to say that the Campbells freed their slaves due to their strong abolitionist beliefs, this probably isn’t the case. Though we do have on reference that Mrs. Campbell didn’t like “the system” of slavery, we can’t discount the difficulties that must have been faced in caring for a young unmarried mother with two very young children, especially in a house that had already lost seven children of their own. However, we also can’t ignore the fact that the Campbells kept up a close personal relationship with Eliza after she was freed. After Virginia’s death in 1882, Eliza was left a gift of $100 (no small change in those days) and son Hugh Campbell lent her an additional $100 a year later when she and her family moved to Kansas City. We also have a letter dated 1918 from an elderly Eliza (she would’ve easily been 80+ years old at that point) to Hugh in which she says hello and thanks him for a Christmas gift he’d sent.

Needless to say, the story of slavery at the Campbell House is complex, with new information emerging every day as our team of volunteers and researchers continues to dig through the tens of thousands of pages of historic documents left behind by the Campbell family. It’s a complicated story, but it’s one that has to be told. To ignore the unseemly portions of our city’s history and and the lives of its most oppressed and unrecognized citizens would certainly make talking about history a whole lot easier, but it definitely wouldn’t be right.