Now I know what you’re thinking-taxidermy is creepy. I would be lying if I said I never made that comment before. However, after spending months doing researching for Curated Curiosities: Taxidermy and Other Objects Under Glass, I gained a new appreciation for the craft.

The Campbell’s bird “Beauty”, preserved as a taxidermy specimen since 1902.

You might also be asking yourself, “did Robert really hunt?” Did Virginia create objects under glass? The answer is no, not that we know of. Robert might have hunted for food during his fur trading days in the Rockies, but never mounted anything as a trophy. And while we do not have evidence that Virginia herself made some objects under glass, the variety of examples in the house suggest she purchased some to decorate her home. However, the Campbells did stuff their pet bird, Beauty, who can be seen on the mantel of the morning room, alongside other birds that served as parlor decorations. Additionally, they have a variety of exotic birds under glass domes, perhaps purchased as souvenirs from their travels. These specimens give us a glimpse into the Victorian taxidermy fad not often told outside of hunting trophies. 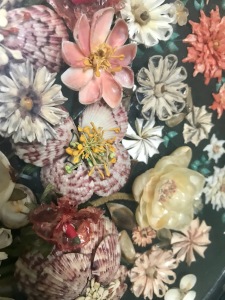 Detail of a flower arrangement made from shells. Courtesy of the St. Louis Science Center.

Originally, taxidermy served as a way to preserve the pets of the aristocracy, but also grew with the interest in the natural world and cabinets of curiosities trend. Many aristocrats during the 17th and 18th centuries collected fossils, gems, bird skulls, feathers, and other items in their cabinet of curiosities. Some of these cabinets were purely for the entertainment and gratification of the owner, having no rhyme or reason for the collection. Others sought to make their collections as scientifically accurate as possible, utilizing scientists, academics, and explorers to collect new and rare specimens from “exotic” lands. A byproduct of this was the formation of museums, which used the collection of these specimens to further study in the field of natural history.

One problem that both collectors, scientists, and museums faced was the preservation of specimens. Often, “stuffed” animals would be destroyed by pests or deteriorate naturally. Artificial eyes and noses were not yet on the market, so many early Victorian taxidermy pieces had preserved bodies with deteriorating “soft” body parts. A variety of preservation methods were introduced, but nothing served as both an insecticide and preservative as well as Bécoeur’s arsenical soap, which served as   go-to preservative for taxidermists from the end of the 18th century until the 1970s.

Becoeur’s recipe for arsenical soap, a revolution in preparing taxidermy.

Taxidermy also served as a learning tool. Today, people might view taxidermy displays or dioramas in natural history museums as “dead zoos,” but before the Central Park Zoo and the Philadelphia Zoo, the first zoos in America, were established in 1850 and 1874, or the St. Louis Zoo which opened its doors in 1910, the average person did not have the opportunity to learn or see many different animals. Perhaps they were just familiar with those on the farm or the birds at the park. Even then, zoological parks did not spring up overnight across the country. Before this, how did one learn about animals? In the early 19th century, books or documents depicting animals included sketches based off of someone’s description of the beast. How does one describe a lion or elephant to someone who has never seen one before? Naturally, these were not accurate sources. Due to a growing fascination and curiosity with the natural world, explorers, collectors, and scientists sought to preserve specimens and display them in a museum, or showcase them at a zoo.

Much like people today, Victorians might have taken an interest in nature due to environmental issues. The Victorian Era in America saw an exponential growth of cities and the birth of the Industrial Revolution, both of which favored progress over preserving the natural world.This led to the growth of displaying nature in the home. Not only did this mean small animals under glass domes such as those in the morning room of the Campbell House, but other examples or recreations of nature as well. These included flowers, plants, fruit, or figurines made from materials such as wax, seashells, hair, wool, or glass.  Additionally, these “crafts” showcased the maker’s wealth. Similar to visiting Hobby Lobby to purchase project materials today,  the person making these crafts needed time and money to create these pieces-a luxury not afforded to the lower class. 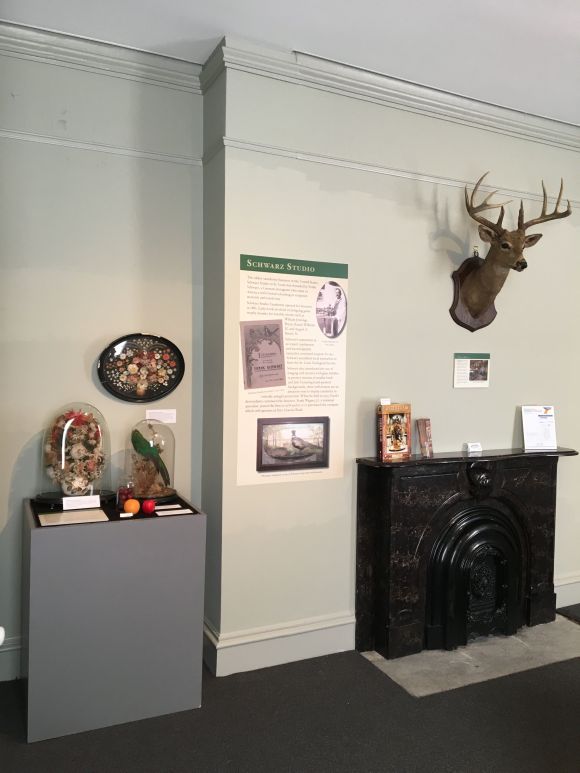 The Taxidermy exhibit, on display through January 2018.

Once seen as curious, cute, or ferocious, taxidermy is now deemed outdated, creepy, and unsettling by most audiences. While this craft and other nature-inspired objects under glass, such as shell art or hair art, are no longer in fashion, they gives us a glimpse into the material culture of the Victorian Era and perspectives on the natural world.

Taxidermy and other nature-inspired crafts were used as a way to preserve nature for scientific study, to display hunting trophies, to preserve pets, as souvenirs from travels, and as decorations. Through January 2018 , you can see all different examples in our exhibit, Curated Curiosities: Taxidermy and Other Objects Under Glass.

If you’ve visited the Campbell House before, or have watched any of Downton Abbey, you know that one of the most important features of a large house with servants are the call bells.

At Campbell House, the original bells still line the top of the kitchen wall, waiting to ring. Eleven of the house’s rooms had a pull on the wall, and each bell made a different noise, allowing servants to go directly to the room required. If you’ve taken a tour, you know all of this. But what you don’t know is what is in the basement.

Three of the call bells stand apart. Also pictured are the pulleys that guide the cords to each individual bell.

The eastern grouping of call bells.

For the Campbell bell system to work, it needed a long series of cords and pulleys. For instance, a bell pull in parlor would require around 80 to 90 feet of cord to reach the kitchen! And this cord would have to be protected in some way to prevent it from snagging on loose nails or becoming tangled with other cords and wires.

The covered box on the basement ceiling, showing part of the cover cut away.

Using the covered box created a problem, however. To travel from the wall to the box cords now had to pivot 90 degrees three times: from the parlor wall to the basement ceiling, from that spot to the covered box, and from the covered box up to kitchen wall. To facilitate this process, the workmen installed metal pivots. Two of these pivots are still nailed to the basement ceiling near the front of the house. One of them has two separate pivots, perhaps with one for the front door and the other for the front of the parlor. The Campbells undoubtedly made use of several more of these pivots.

This system was probably used thousands of times, whether to call for tea in the parlor, to give instructions for dinner, or to inform of the arrival of a guest. Although the cords themselves are long since gone, the remnants of the system are still there, waiting to call the servants into action once more.

As the cold winter weather approaches it is a perfect time to take a closer look at what else, chimney pots.

If you have visited the Campbell House recently, you may recall three chimney pots as part of the Lucas Place exhibit. As we moved the chimney pots back into storage, we thought it might be interesting to recount their history. For supposedly stationary objects, these pots have moved around quite a bit, perhaps emphasizing the truthfulness of the old adage, “Not all who wander are lost.” This, then, is the tale of the wandering chimney pots.

The three chimney pots, from left, are A, B, and C for this article’s purposes.

Perhaps unsurprisingly, the chimney pots were never the subject of historical photographs at Campbell House. Luckily, however, there are just enough photos of the side and rear of the house that their presence can be discerned. In one of the 1885 photographs, for instance, the chimney pots can be seen sticking up above the carriage house. Upon closer examination, the octagonal pot (we’ll call it Pot B for now) sits on the rearmost chimney, servicing the kitchen and rear third floor. The round pot (henceforth Pot A) is on Mrs. Kyle’s Bedroom’s chimney. Interestingly, in another angle of the house, another round pot can be seen on the rear parlor chimney. Pot A could be either one of these. 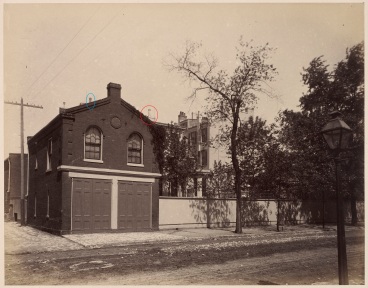 A closeup of the chimneys clearly shows the exact style of both pots.

This angle shows the pots on the rear parlor and Mrs. Kyle’s bedroom. Either pot could be Pot A.

Notably, there are no pots of the Pot C variety. To find them, we have to fast-forward to 1930, when suddenly there are eleven of them. For some reason, when those pots went up, the decision was made to save pots A and B, and place them together on the rearmost chimney on either side of Pot C. As grateful as we are for the decision to save them, we can’t help but wonder: why put the fanciest two pots on the least visible chimney?

It’s easy to overlook the chimneys in this photo, but looking closely reveals that two of the three pots on the rear chimney are different in size and shape. Pots A and B have moved again!

Whatever the reason, pots A and B remain on the back chimney in this photo from the 1960s. The C pots, however, have been rearranged, possibly by the museum. Now, two C pots rest on each of the parlor chimneys, providing better symmetry than was present in the 1930s. 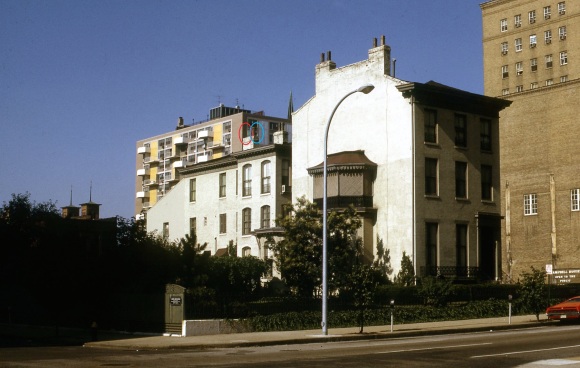 Although hard to make out, Pot A is circled in red, and Pot B in blue.

The pots are rearranged yet again after the museum’s first restoration in 1968. Evidently looking for the best aesthetics, the museum plopped pot A on the rear parlor, and pot B on the front parlor. It may have been at this point that pot B was plugged by cement, although for what reason (and why only this pot) is unknown.

Despite decades of exposure, the collection of chimney pots survived whatever Mother Nature threw at them, suffering little more than staining and discoloration. That all changed in 1998, when a strong gust of wind sent one pot, of the “C” type, hurtling towards the ground below. Luckily, no one was injured, although the pot lost much of its upper third. This pot now lives in the basement.

Its a hard life, being a chimney pot.

When The Restoration began in 1999, the pots were moved yet again. With scaffolding thrown up around the whole house, the decision was made to temporarily remove pots A and B for their safety. Naturally, the pots have never returned to the roof. For some reason, pot C was also moved off the roof.

This brings the saga of the chimney pots back to where we began, with the pots heading towards storage. Given their propensity to move around, though, maybe we’d better keep a close eye on them…